A suit for partition was filed by one Thangammal, daughter of Ramasamy Gounder, claiming 1/5th share in the self-acquired property of her deceased uncle, Marappa Gounder who is the elder brother of Ramasamy Gounder. The plaintiff alleged that the property was inherited by Kupayee Ammal after the death of her father, Marappa Gounder and upon her death in 1967, it shall devolve further upon the five children of Ramasamy Gounder since Kupayee Ammal died issueless. Since the parties died during the pending of suit so, they are represented by their legal representatives. The Trial court held that Marappa Gounder died on 15.04.1949 and therefore, the suit property would devolve upon the sole son of deceased Ramasamy Gounder deceased brother of Marappa Gounder by survivorship and the plaintiff-appellant had no right to file a suit. The High Court of Madras affirmed the decision of the Trial Court by stating that the property shall devolve upon the defendant based on the survivorship. The present appeal was filed challenging the order of the Hon’ble High Court. 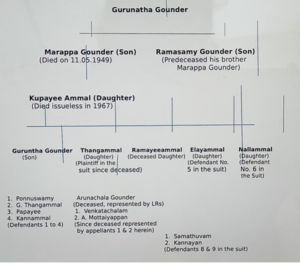 Whether the self-acquired property of father will devolve on to the daughter upon the death of her father intestate by inheritance or shall devolve upon the father’s brother’s son as per the doctrine of survivorship?

For the determination of this fact in issue, the Supreme Court three different questions:

Decision: The Hon’ble Supreme Court allowed the appeal and held that a daughter is capable of inheriting the self-acquired property of a father dying intestate (prior to the enactment of the Hindu Succession Act, 1956).

Law as held: The Hon’ble Apex Court arrived at the decision by noting the following:

Sources of Hindu Law and Statute

The origin is traced in antiquity and the law is assumed to be preserved in Vedas; Shrutis; Smritis like- Manu, Yajnavalkya, Vishnu; commentaries and digests. With the progress in time and change of social conditions, the source of Hindu law also changed to customs, equity, good conscience and judicial decisions or legal precedents. At present, there is The Hindu Succession Act, 1956 (hereinafter, the Act) which amended and codified the Hindu law relating to intestate succession. It was introduced to establish sense of equality among females with regard to property rights, thereby abolishing the concept of limited estate and giving her an absolute interest in the property. The relevant provisions of this Act for the present case are as follows:

Section 14. Property of a female Hindu to be her absolute property.

Section 15. General rules of succession in the case of female Hindus.

The court noted the following substantial position of law while dealing with this case:

The Sapindas succeeded in the following order:-

However, in the present case Kupayee Ammal inherited the property and died in 1967 after the Hindu Succession Act, 1956. Therefore, the property of deceased Kupayee Ammal shall be succeeded by Ramasamy Gounder’s daughters as they are Class I heirs of their father. Hence, they shall be entitled to 1/5th share each in that property.